As a daughter of a Chilean mother and an Uruguayan father, Mariela G. Dominguez has lived between Santiago, Chile, Buenos Aires, Argentina, where she was born and Montevideo, Uruguay. She currently resides in Houston, Texas.
Her studies and interests have been various; among them are Project Development in the Field of Visual Communication, including video arte, urban art, fashion design, sculpture, jewelry design, and painting.
As a graduate in Graphic Communication, Mariela worked in the production of the project 730 días de Cartel. This was an outstanding project of contemporary poster design in Chile.
Later, at the University of Buenos Aires, Argentina, after graduating in Strategic Management Design, she focused her creative abilities in the management and planning of projects that integrate design with the visual arts.
During her professional experience she has maintained a permanent compromise with the development of projects that involve communication and independent artistic production.
Her activities as a curator started in the year 2009, in the city of Buenos Aires with the visual arts initiative Sincura. Afterwards, in the same creative tendency she continued with the international visual arts project Cuatro Veces Yo, shown between the years 2014 and 2016 in the cities of Montevideo, Buenos Aires and Santiago. The exhibition included four different painters. In 2015 while living in Santiago she co-directed the management and production of the Lobas festival, whose objective was to highlight and promote the work of more than 20 female artists.
Currently based in Houston, her graphic design company, xzzxdesign, maintains a stable portfolio of international clients. Along with expanding her portfolio she is interested in the development of exhibitions that promote Hispanic and emerging local art. She also continues her own artistic production by creating innovative works of decorative art. She was recently selected to exhibit at the CraftTexas 2018 at the Houston Center for Contemporary Craft.

Artist Statement Many moons have passed between now and the distant actions of my childhood. However I cannot ignore the relationship between these remote memories and my current creations. It started, like most children, in kindergarten where I created clay figures that I transformed into narrative scenes of fantasy and fun. Naturally this craft shown through in various others forms and uses. Due to family circumstances, I had to learn to cook at an early age. So in order to enjoy it more, I mainly made pastries and included the forms and figures I had always done with clay, but this time as edible treats. Although I must admit I did not come to these conclusions by myself. I remember a women neighbor friend of the family whom shared with me her enthusiasm for antique birthday cakes and homemade creams of all colors, and me being marveled by the patterns and textures of something so delicious. My family lived a sort of nomadic lifestyle. At some point in one of these new geographies I discovered a material that was easy to mold and apply color, being playful and experimental but at the same time harden to form a figure much more solid than that of marzipan or plasticine. Since then my models became objects with greater autonomy and easily adaptable to my plastic art expression requirements. Over time I have developed my own version of this material and it is the base of my most recent sculptural art works. The clay is composed of cornstarch, liquid glue, vinegar, petroleum jelly, and some essential oils. Once cooked I add pigments to separate sections creating a base of primary colors, from which I mix small amounts of each to create the large spectrum of colors which can be seen in my works. The resulting clay is very popular in the world of cheap souvenirs and kitsch objects. Products made from these types of clays are not usually linked to artistic production, nor related to craft productions, but rather seen as an insignificant material made for non-serious domestic projects, and primarily geared towards women. In this sense the clay that I use is doubly marginalized, relegated by its domestic use by women, as well as being seen as something used in decorative minor crafts and cheap souvenirs. On the other hand, my profession as a graphic designer exposed me to other interests linked to communication. Since then I have been interested in the cultural history and traces of meanings that are reflected by the passage of time in different mediums of communications and artistic creations. The forms of communications I am mainly interested in are ̈street expressions ̈, such as graffiti, posters, flyers, advertising signs as well as public traffic signs. As I wander the streets, I find symbols and meanings in the signs and posters littered throughout the city. I choose certain supports which I can intervene and reuse. Naturally these ̈canvases ̈ relate to the urban and social collective in that they are a vehicle of information meant for the public, but in my appropriating of them, bringing them back to the domestic domain where I apply colorful clay, I am creating an object of various degrees of urban, kitsch, domestic and playful. My current ambitions are to blend the domestic with the external and social environment. In this form I express two possible narratives. The first being the household environment with its routines, love and its many emotional conditions, often invisible in the context of capitalist productivity. And the second being the external or urban environment, a mostly wild and chaotic narrative with serious glimpses of dehumanization and depersonalization. It is certain I am looking to rescue a homemade material that is linked to my personal story, and at the same time make visible critical traits of the social framework, so that my work excels as transforming element in our everyday environment. 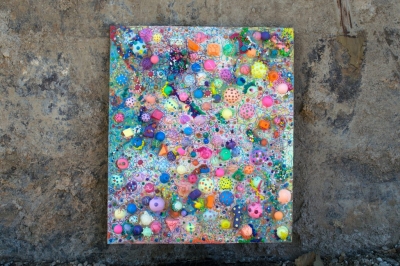 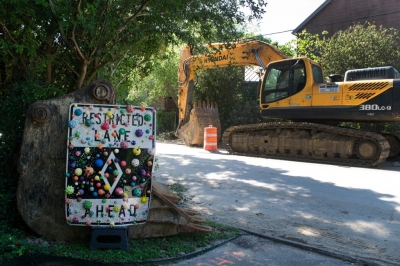