Verny Sanchez is a Venezuelan/American artist whose creative practices include painting, installations, assemblages, drawing and sculpture. His work, which is constructed on a continuum between abstraction and representation, explores themes of expression, communication and emotion in compositions that often blend the real and the imaginary. A distinctive pictorial language, first inspired by the ancient petroglyphs he encountered as a youth in Venezuela, has become a unique vernacular in his work that hints at an ongoing quest for identification through visual dialogue.

Born in Maracaibo, Venezuela, in 1973, Verny earned a degree in graphic design at the Instituto de Diseño de Caracas, where he later returned to lead the graphic design program as Director. He has also held teaching posts at The Altos de Chavón School of Design in the Dominican Republic, the Centro de Diseño Digital de Caracas in Venezuela, and the European Design Institute in Madrid, Spain.

Verny lived in Spain for 12 years, and became an artist-in-residence at La Escocesa, a self-managed visual artistic production center in Barcelona. His work has been exhibited in solo shows in Barcelona and Caracas, as well as in group shows in New York, Miami, Houston, Austin, Caracas, and Barcelona, Spain. His work is held in private collections across the United States, Europe, and Latin America.

Verny currently lives in Houston, Texas, where he works out of his studio in the heart of the Washington Arts District.

Artist Statement Human communication is often convoluted, multi-faceted, and in some cases, perverse. My work explores the emotional language of people—it is a quest for connection and communication through visual dialogue. My work is heavily influenced by petroglyphs I first saw as a child growing up in Venezuela, while camping with the Boy Scouts. To me, glyphs, as they are commonly called, represent an early but effective form of emotional language that transcends modern barriers to communication. Based on these glyphs, my work explores the relationship of visual language to modern linguistics and emotional interactions. My work can best be summarized as a search for balance in the chaos that is communication in the modern world. In the abstract works that comprise my “Glyph” series, I try to give petroglyphs a new life. I use heightened multi-chromatic color and fluidity of movement in an attempt to evoke the competing feelings of chaos, complete stillness, and ultimately, balance. In my later “Homoglyphic” series, I push the limits of my earlier work by introducing interconnected human figures into the more abstract structure of the “Glyph” series. My introduction of the figurative style into abstract artistic language represents the evolution of communication through interconnection and the simplification of key emotional messages. My current work seeks to expand and explore the boundaries of my existing creations, in an attempt to further engage the viewer in a timeless dialogue. 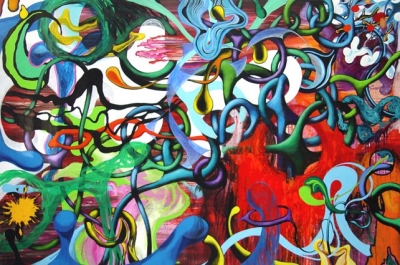 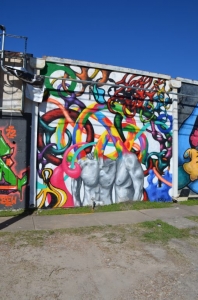 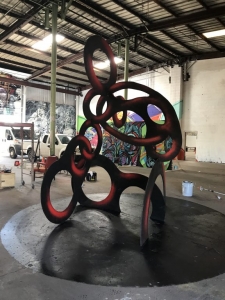