At an early age, Nancy Oberer, showed a great passion and an interest to become an artist. While she was attending school in her own native land of Venezuela, she began taking lessons with a renowned art teacher, Dr. Numa Lucena, who also was the psychologist at the Military Institute of Grand Mariscal de Ayacucho, where she graduated from. He inspired her to continue her dream of becoming an artist. Nancy started working by using the pastel technique. Then, being inspired by the landscape of her own country, began using oils an acrylics as a source of her inspiration, painting still life and the picturesque sceneries of Venezuela.

Later, Nancy decided to travel to different places within the United States, and settled in upstate New York, where she enrolled at Cayuga Community College. Then, she resettled in the Houston area, and registered at The Lone Star College in kingwood, where she graduated from with an AA degree. Also, she attended the University of Houston where she received her Bachelor of Fine Art degree in Studio Art-Painting. Among her teachers were, Gail Stack, Aaron Parazette, Rachel Cook, and others. Nancy still continued her education in Abstract Art at the Glassell School of Art in Houston, under the guidance of the professor and curator, Arielle Masson. At the present, Nancy works primarily with acrylics materials.

Artist Statement I have been inspired by what is not visible to us through our normal naked eye. It is inconceivable to understand its existence, therefore, I have decided to depict this complex and endless cycle of all living forms on the surface of the canvas. It is a planned and controlled combination of living forms that when combined together create movement. This action is being described as the main characteristic throughout my work. Gradually my art works begin to show organic forms, spreading randomly and bursting into action on the canvas. But ultimately, my paintings are the dialog between myself and the simplification in the creation of life itself. These variations of shapes when developed together, convey a visual statement and a journey in motion. Consequently, the viewers will interpret the subject as being unique because of the effect it has created within us from our own existence. Initially, by placing the forms onto the space of the canvas, it shows a structure throughout a body of fluids that moves rapidly in different directions in the negative space. This relationship between the negative and the positive space when combined together will create tension between them and show movement throughout the whole composition. It is the beginning of life itself moving rapidly. I have developed a unique relationship between myself and the viewers, by focusing on these living forms that move and multiply freely throughout a fluidly space on the canvas. Also, I have created my own personal statement by inviting the viewers to observe how the principles of evolution apply to all living matters in the creation of life. 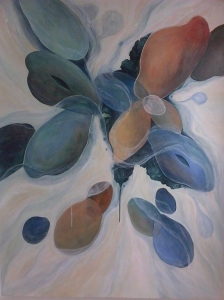 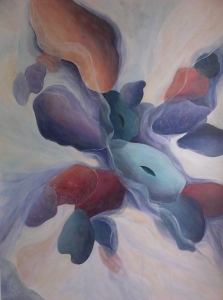 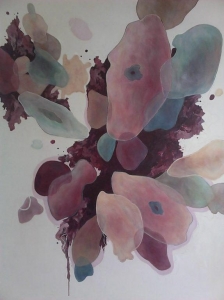 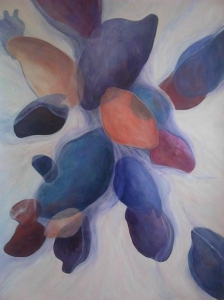