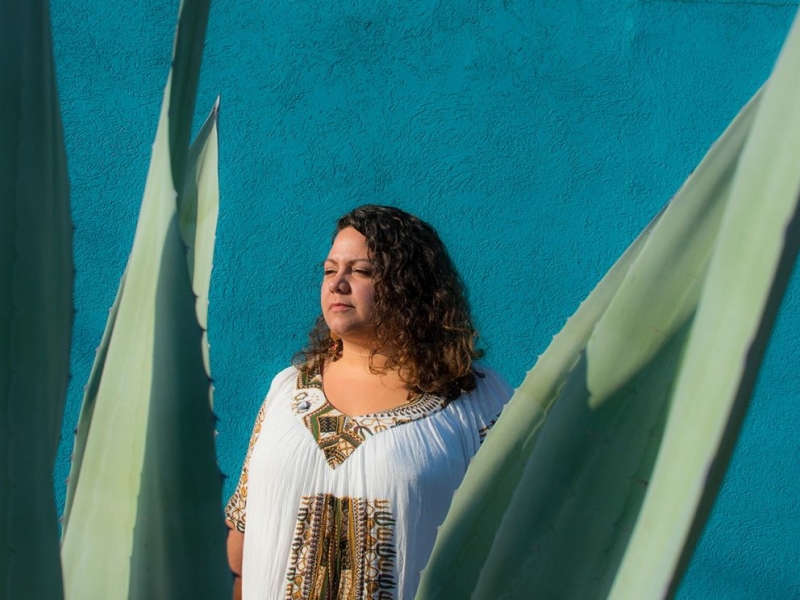 Deniz 'dee!colonize' Lopez is Xicana artist & activist who has held position or collaborated with such organizations as MECHA, The Texas Death Penalty Abolition Movement, The Word Around Town Poetry Tour, Creative Women Unite, and Voices Breaking Boundaries to bring a message of revolution, self-sustainability, & community consciousness to the forefront. The themes of her artistry include the abolition of the death penalty, an end to police brutality, empowerment of women, immigration rights, black/brown unity, Indigenous culture & history, and self mastery.

Deniz has begun to use her extensive knowledge of community organization, administration, communication, and mentoring to become a creative consultant to many organizations and artists to help them refine their arts.

At present, she is a founding member & owner of All Real Radio LLC, where the mission is to make the world better by creating a portal to great music and relevant social commentary, and by facilitating a space for community events & awareness.

Artist Statement I got my start as a social justice activist and community organizer in 2005. I learned about my culture, politics, and the history of this country. I found that most of the people that I conversed with on a daily basis were my colleagues, and thus, people that knew what was ‘going on in the World’ already. I had been a short story writer since the fourth grade. I would keep a spiral notebook in my bag filled with one to two page short stories or poems inspired by what was happening in my life. In 2007, this background fused and I realized that if I wanted to educate and reach the masses and get my message across, poetry was going to have to be my medium. I wrote a 2 page poem for an event I hosted with friends dealing with Anti-Police Brutality. Afterwards, I was invited to speak on the death penalty, immigration, cultural pride, and more. In 2009,I was added to a yearly poetry tour and the rest is history (really). I performed alongside some of Houston’s best poets, veteran and new alike. We formed an artistic family and, in a personal way, they helped me mold my mind and find myself - I am an educated, patient, peaceful, socially responsible Xicana. Over the years, I have continued to be invited to speak, educate, and lead workshops all over the city and other parts of Texas. My love of words and information lead me to co-found a 24/7 online radio station called All Real Radio in 2014. Ever since, we have held a space for independent media and positive vibrations. The best part of all of my work is seeing people of all ages and backgrounds grow. Getting someone to write words is one thing. Some would even say it’s simple. Yet, helping someone to internalize their World and be able to express who they are within it… now that is a beautiful challenge!

The Case of Jose Campos T